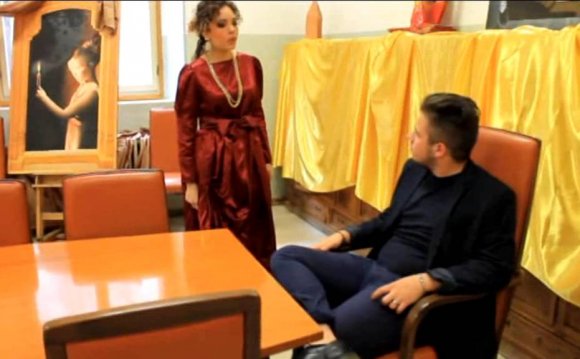 Scotland, PA is a 2001 film directed and written by William Morrissette. It is a modernized version of William Shakespeare's . The film stars James LeGros, Maura Tierney, and Christopher Walken. Shakespeare's tragedy, originally set in Dunsinane Castle in 11th century Scotland, is reworked into a dark comedy set in 1975, centered on "Duncan's Cafe", a fast-food restaurant in the small town of Scotland, Pennsylvania. The choice of Pennsylvania is arbitrary, though it coincides with two real towns, one southwest of Harrisburg on the outskirts of Chambersburg called Scotland and one just south of Erie, called Edinboro after Scotland's Edinburgh. The film was shot in Nova Scotia.

In 1975, Duncan’s, a fast-food restaurant owned by Malcolm in the tiny hamlet of Scotland, Pennsylvania, hosts a variety of workers. Joe “Mac” McBeth is passed over for a promotion to manager by Douglas McKenna, who has been embezzling the restaurant’s money. Three stoned hippies, one a fortune teller, inform Mac that they see a bank drive-thru style restaurant in his future as management. Mac and Pat McBeth then play informants on McKenna, and Duncan recognizes the value of Mac's efforts on behalf of the restaurant. Duncan shares with the McBeths his plans to turn his failing burger joint into a drive-through, and Mac realizes how profitable the drive-through could be. Duncan is promoted to assistant manager but is hit in the head with a refrigerator door. Pat then decides to murder Duncan in a staged robbery. Mac and Pat attack Duncan to acquire the combination to the restaurant's safe, and Mac assaults Duncan, but is distracted by a vision of the three hippies, allowing Duncan to fall head first into a deep fryer that splatters and burns Pat’s hand. Investigator McDuff arrests a local homeless man, to whom Pat has given Duncan's jewelry, and the restaurant is willed to Mac. The McBeths immediately realize Mac’s ideas, and the restaurant's business takes off.