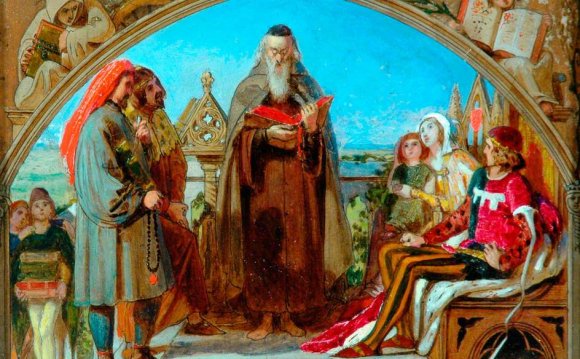 When this miracle had been entirely told, everyone was rather sober, until our Host began to jest, and then for the first time he looked on me and said, "What sort of man are you? You look as if you are hoping to find a hare? I always see you staring at the ground. Come nearer and look up merrily. Now make way, sirs, and give this man room! His waist is shaped as well as mine, small and fair of visage; he would be a little doll for any woman to embrace in her arms, small and fine in face. He seems elf-like in his countenance, for he is sociable with no creature. Now tell us something, as other people have done. Tell us now a tale of mirth." 706

"Host, " I said, "do not be displeased, for certainly I know no other tale but a rhyme that I learned long ago." 709

"Listen, lords, with good will, and truly I will tell you of mirth and joy, all of a knight, fair and noble in battle and tournament, Sir Thopas was his name. 717

Born he was in a far country, beyond the sea, in Flanders, at Poppering in the manor-house. His father stood in high degree, by God's grace lord of that country. 723

Sir Thopas grew into a spirited swain, with a face as white as wheaten bread and lips as red as a rosebud. His hue was like deeply-dyed scarlet cloth, and I tell you of a truth he had a seemly nose. 729

Like saffron was his hair and his beard, which reached to his girdle. His shoes were of Cordovan leather and his brown hose from Bruges. His robe was a rich silken material which cost many half-pennies. 735

He could hunt wild deer and ride along the river hawking, with a gray goshawk on his hand. He was a good archer as well and he had no peer at wrestling, wherever a ram was staked as the prize. 741

Many a maiden, bright in her bower, mourned for love of him when she had better have slept; but he was chaste, and not a lecher, and sweet as a flower of the thorn that bears the red hip. 747

One morning it so happened that Sir Thopas would ride forth, and he got upon his gray steed, in his hand a lance, and a long sword by his side. 753

Through a fair forest he spurred, where many wild beasts were, yes, both bucks and hares; but as he rode south and rode north, I tell you a sorry chance had nearly happened to him. 759

There sprung herbs great and small, the licorice and ginger and many a clove and nutmeg to put in ale, whether fresh or old, or to put away in a box. 765

The birds, the sparrow-hawk and the popinjay, sang, and without a doubt that was a joy to hear; the male thrush as well made his ditty, and the wood-dove on the branch sang loud and clear. 771

Sir Thopas fell into love-longing when he heard the singing of the thrush, and spurred on like a madman; his fair steed sweated so with the spurring that one might have wrung out water, and his sides were all bloody. 777

Sir Thopas too was so weary from riding over the soft grass, so fiery was his spirit, that he laid him down in that place and rested his charger and let him feed. 783

"Oh St. Mary, God bless you! What ails this love to bind me so sore? By God, I dreamed all the night long that an elf-queen shall be my love and sleep under my cloak. 789

"I will truly love an elf-queen, for in this world is no woman worthy to be my mate; I renounce all other women, and I will take myself over dale and hill to an elf-queen." 796

He climbed straight into his saddle and spurred over stile and stone to find his elf-queen; until he found in a secret retreat the Fairy Land so wild; for there was no other who dared to ride into that country. 806

At length came a great giant, Sir Elephant by name, a perilous man in his deeds, and said, "Young knight, by Mohamed, unless you spur out of my haunt, I will slay your charger with my mace. Here dwells the queen of Fairy Land with harp, and pipe and tabor." 816

The knight replied, "As I hope for bliss, tomorrow I will meet you when I am in armor. And I hope, by my faith, you shall yet very bitterly pay for it by this lance's point. I will thrust through your maw, I trust, before prime of day; and here shall you be slain." 826

Sir Thopas drew back quickly. The giant cast stones at him from a fierce staff-sling; but Child Thopas escaped, entirely through God's grace and his own noble bearing. 832

Yet listen to my tale, lords, that is merrier than the nightingale, for I will whisper to you how Sir Thopas, with his slender flanks, spurred over hill and dale and came to town again. 838

His merry men he told to make glee and jollity, for he must fight a giant with three heads; all for the love and joy of one who shines fair. 844

"Call here my minstrels, to recite tales while I arm myself; and royal romances, of popes and cardinals and of love-longing!" 850

First they fetched him sweet wine and mead in a wooden bowl; royal spicery, gingerbread and licorice and cumin with excellent sugar. 856

Next to his white flesh he donned breeches and a shirt of fine clear linen, and over his shirt a quilted tunic and over that a coat of mail to save his heart from piercing. 862

Over that he wore a hauberk of strong plate, all of Jews' work, and his coat of armor white as a lily. 868

His shield was all of red gold, and bore a red gemstone and a boar's head. There he swore by bread and ale how that the giant should die, come what may! 874

His leg armor was of hard leather, the sheath of his sword of ivory, and his helmet bright and brazen, his saddle of whale-ivory, his bridle shone like the sun or as the moonshine. 880

His spear was of fine cypress and boded war, and no peace, with its head ground sharp. His steed was dapple-gray and went a soft and gentle amble all through the land. 887

my wife speak japanese and i translate to english