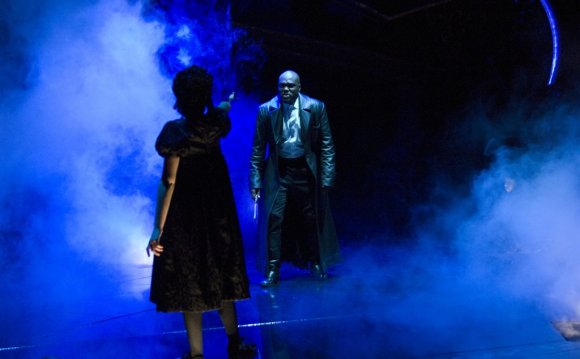 MacbethIs a 2006 Australian adaptation of William Shakespeare's . It was directed by Geoffrey Wright and features an ensemble cast led by Sam Worthington in the title role. Macbeth, filmed in Melbourne and Victoria, was released in Australia on 21 September 2006.

Wright and Hill wrote the script, which — although it uses a modern-day Melbourne gangster setting, and the actors deliver the dialogue in Australian accents — largely maintains the language of the original play.

Macbeth was selected to screen at the Toronto International Film Festival in September 2006.

This adaptation of Macbeth takes place in the Melbourne underworld. Macbeth (Sam Worthington), a loyal underboss to his crime boss Duncan (Gary Sweet), is told by teenage witches that he will one day assume great power. Driven by their prophecy, his wife (Victoria Hill) plans to kill Duncan and take the leadership of the gang for herself and her husband. Macbeth's obsessive love for her leads him to agree to her murderous plan, but he finds that maintaining his power will require a lot more from him than first imagined.

The film opens in a cemetery where the Weird Sisters, three school girl witches, are seen destroying and defacing headstones and statues, while close by Lady Macbeth weeps beside a headstone marked "beloved son". Macbeth stands by. It is here that the three witches make their plan to meet with Macbeth later, and leave the cemetery, smiling smugly at Macbeth from afar.

Macbeth leads Duncan's gang, in his absence, to do a drug deal with Macdonwald and his men. In a gunfight between the gangs, all members of Macdonwald's gang are killed. While chasing two gunmen, Banquo and Macbeth are led to the Cawdor Club. They seize the club. The current owner of the club is tied up and later killed.

Duncan officially hands the club over to Macbeth, and Macbeth and Banquo celebrate by drinking the club's alcohol and taking some pills found on a table. During this drug trip Macbeth meets the three witches, who prophesy that he will soon be in Duncan's position with total control over the gang. He tells his wife this, though she doubts he has it in him to take over Duncan's position. Later when she learns that Duncan will be dining and staying at their house, she plots with her husband to kill him, passing the rank of gang leader to Macbeth.

Lady Macbeth drugs Duncan's bodyguards, and while they sleep Macbeth takes their knives and kills Duncan, framing the guards. Macduff comes to Inverness and finds Duncan murdered in his bed. Before the bodyguards can profess their innocence Macbeth shoots them. Malcolm, Duncan's son, immediately suspects Macbeth as having something to do with his father's death and flees.

After Macbeth is hailed as the new leader by most of Duncan's gang Macbeth sends two murderers to kill Banquo and his son, Fleance. The murderers kill Banquo, but Fleance escapes. Macbeth holds a celebratory dinner, and after learning that Banquo has been killed, sees a vision of Banquo's ghost at the dining table. Macbeth is becoming more shaken by his desire for power. Lennox, Ross and others now suspect Macbeth of killing Duncan and Banquo.

Macbeth finds the three witches in his house that evening and, after drinking a foul potion and engaging in an orgiastic sexual encounter with them, asks the witches of his future. He is told to fear Macduff, but no man "of woman born shall kill you". Later it is revealed that Macduff is not a natural birth, but a caesarean section, which is not "of woman born". He is also shown a vision of Fleance being hailed as gang leader. These prophecies enrage Macbeth, as does the witches' quick disappearance, and he has the murderers go to Macduff's home and brutally kill Lady Macduff and her son.

Seeing this on the television, Lennox and Ross go to tell Macduff who has gone to his uncle Siward. Malcolm convinces him that Macbeth has gone much too far in his quest for power and must be stripped of his leader status.

Meanwhile, Lady Macbeth has become more insane, to the point where she re-imagines the evening of Duncan's killing and continuously tries to wash off his blood from her hands. A doctor sedates her, and Macbeth appears fairly indifferent to her instability. He prepares for the impending attack from Macduff, Lennox and Ross. Lady Macbeth commits suicide in a bath tub by slashing her wrists, enraging Macbeth. The two murderers, realising the unlikeliness of surviving the attack, swiftly flee Dunsinane leaving Macbeth with only Seyton, his main bodyguard, and two others. The murderers run into Macduff and his associates at the edge of Burnham Wood and are shot. Fleance looks on.

Malcolm leads his men to Dunsinane where they ambush the house and a large gunfight ensues between them and Macbeth and his guards. Macbeth is chased to the cellar where he faces off with Macduff and is stabbed in the stomach. He stumbles upstairs to his bedroom, where the body of Lady Macbeth lies, and dies at her side. As Macduff leads Fleance, now the inherited gang leader, from the house Macbeth's famous "tomorrow and tomorrow and tomorrow" speech is heard.