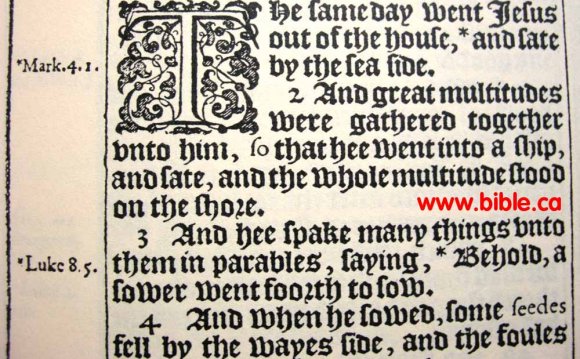 QUESTION: Aren't there archaic words in the Bible, and don't we need a modern translation to eliminate them?

ANSWER: Yes and No. Yes there are archaic words in the Bible but No, we do not need a modern translation to eliminate them.

EXPLANATION: That there are archaic words in the Bible is very true. An archaic word is a word which is no longer used in every day speech and has been replaced by another. A good example of an archaic word is found in I Corinthians 10:25.

"Whatsoever is sold in the shambles, that eat, asking no question for conscience sake:"

The word "shambles" is archaic. It has been replaced in common speech with the word "market place", Indeed we can be certain that "shambles" was a much more accurate description of the ancient market place (and many around the world today). It has none the less passed from common use.

Well then, shouldn't we publish a new translation which removes " shambles" and inserts the more common "market place"?

In searching the Scripture we find the Bible practice for handling archaic words in I Samuel chapter 9:1-11. "Now there was a man of Benjamin, whose name was Kish, the son of Zeror, the son of Bechorath, the son of Aphiah, a Benjamite, a mighty man of power.

2 And he had a son whose name was Saul, a choice young man, and a goodly: and there was not among the children of Israel a goodlier person than he: from his shoulders and upward he was higher than any of the people.

3 And the asses of Kish Saul's father were lost. And Kish said to Saul his son, Take now one of the servants with thee, and arise, go seek the asses.

5 And when they were come to the land of Zuph, Saul said to his servant that was with him, Come, and let us return; lest my father leave caring for the asses, and take thought for us.

6 And he said unto him, Behold now, there is in this city a man of God, and he is an honourable man; all that he saith cometh surely to pass: now let us go thither; peradventure he can shew us our way that we should go.

7 Then said Saul to his servant, But, behold, if we go, what shall we bring the man? for the bread is spent in our vessels, and there is not a present to bring to the man of God: what have we?

8 And the servant answered Saul again, and said, Behold, I have here at hand the fourth part of a shekel of silver: that will I give to the man of God, to tell us our way.

9 (Beforetime in Israel, when a man went to inquire of God, thus he spake, Come, and let us go to the seer: for he that is now called a Prophet was beforetime called a Seer.)

10 Then said Saul to his servant, Well said; come let us go. So they went unto the city where the man of God was.

11 And as they went up the hill to the city, they found young maidens going out to draw water, and said unto them, Is the seer here?"

Here, in the first eleven verses of I Samuel 9 we are not only confronted with an archaic word, but with the Bible practice for handling it.

We find Saul and one of his father's servants searching for the asses that had run off (I Samuel 9:1-5).They decide to go to see Samuel the seer and enlist his help in finding the asses (verses 6-8).

In verse 11 we are going to run into an archaic word. But, before we do, God puts a parenthesis in the narrative (verse 9) to tell us about it. Notice that verse 9 states that "he that is now called a Prophet was beforetime called a Seer".Thus we see that, between the time that this event took place and the time that the incident was divinely recorded the word " Seer" had passed from common use to be replaced with "Prophet". "Seer" was now archaic.

BUT, look carefully at verse 11 where the archaic word appeared.

"And as they went up the hill to the city, they found young maidens going out to draw water, and said unto them, Is the seer here?"

Please note that the verse retains the outdated word "seer". It does not say "Is the prophet here?".

Thus we see that God Himself through the divine inspiration of the Holy Spirit used verse 9 to explain the upcoming archaic word but did not change the holy text!

So we see that, the Bible practice for handling situations such as we find in I Corinthians 10:25 when preaching is to tell the congregation something to the effect that "What beforetime was called 'shambles' is now called 'market place"'. But we should leave the archaic word in the text. This is what God did! Surely we sinners are not going to come up with a better method for handling archaic words than God has.

So, the answer to the question is, "Yes, there are archaic words in the Bible but No we do not need a modem translation to eliminate them. God didn't change His Book, He certainly does not want us doing it.