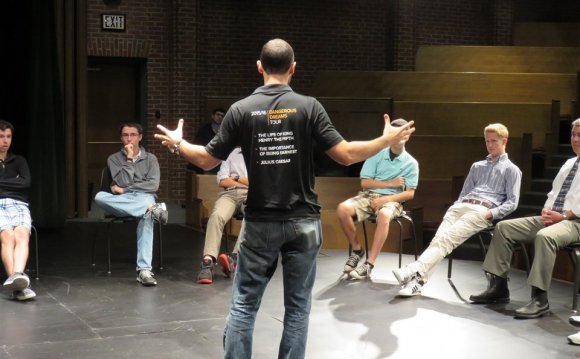 As the two tribunes approached the forum they found that the crowd had become impossible to disperse. All they could do was join them and watch as some of Rome’s most famous and powerful people swept into the square. At the centre of them was Julius Caesar himself and his wife Calphurnia. Caesar’s friend, Mark Antony, was at his side, stripped down like an athlete. Some of the other, almost equally famous people, surrounded them. Brutus and his wife Portia were among them. Cassius was there, and Casca and Decius too.
Caesar was tall and stiff. He stopped and turned majestically to his wife. ‘Calphurnia, ’ he said.

Casca gestured to the crowd. ‘Quiet, there, ’ he shouted. ‘Caesar is speaking.’

‘Here my lord, ’ she said and moved closer to him.

‘Stand directly in Antonius’ way as he runs in the race.’ He turned his head stiffly. ‘Antonius.’

‘Don’t forget in your haste, Antonius, to touch Calphurnia as you run past her. Tradition tells us that barren women who are touched by a runner in this holy race become fertile.’

Caesar raised his arm. ‘Begin, ’ he said, ‘and don’t leave anything out of the ceremony.’

The band began to play and they all started walking. An old man with a long beard called out from the crowd. ‘Caesar!’

Caesar stopped and turned to look at the faces around him. ‘Ha, ’ he said. ‘Who called me?’

Casca shouted at the crowd again. ‘All be quiet. Again, quiet!’ The band stopped playing and the noise subsided.

‘Who is it that called me from the crowd?’ said Caesar. ‘I heard a high voice, higher than all the music, cry out ‘Caesar’. Speak. Caesar is turned to hear.’

The old man took a step forward. ‘Beware the ides of March, ’ he said in his high-pitched voice.

Caesar took in the man’s scruffy appearance and turned up his nose. ‘Who’s that?’ he said.

Brutus was at Caesar’s side now. ‘It’s a fortune-teller, a soothsayer, telling you to beware the ides of March.

Cassius gripped the man’s arm. ‘Come on, old man, come out of the crowd and face Caesar.’ He pulled the man, who shuffled out and stood before Caesar.

Caesar looked down at him. ‘What did you say to me? Say it again.’

The old man looked up at Caesar’s face. ‘Beware the ides of March, ’ he said.

Caesar looked thoughtful for a moment then shrugged. ‘He is a dreamer. Let us leave him. Move on.’

The band started up again and they walked on, towards the street that led to the stadium.

Two of the senators, Brutus and Cassius, hung back.

‘Aren’t you going to watch the race?’ said Cassius.

‘I’m not sporty, ’ said Brutus. ‘I’m not like Antony. I don’t have that interest. But don’t let me stop you, Cassius. I’ll leave you to it.’

Cassius made no move to go. They stood for a moment then Cassius spoke. ‘Brutus, I’ve been watching you lately. You’ve changed towards me. I don’t see that friendliness in your eyes that I used to. You’ve become too remote from this close friend of yours.’

Brutus frowned. ‘You’re mistaken, Cassius, ’ he said. ‘If I have veiled my look it’s because I’m preoccupied. I’ve been troubled lately with some thoughts that concern only myself. Maybe that’s affecting my behaviour. But I hope my good friends, among which you’re one, won’t be upset, nor put any construction on it other than that I’m at war with myself and that perhaps makes me seem as though I don’t value them.’

‘Then Brutus, I’ve mistaken it. And for that reason I’ve not shared some concerns that I have. Tell me, good Brutus, can you see your face?’

Brutus laughed. ‘Of course not, Cassius: for the eye can’t see itself except by reflection off something else.’

‘That’s true, ’ said Cassius. And it’s a great pity that you don’t have the kind of mirrors that could make you see your hidden merit. I have heard that some of the highest regarded men in Rome, apart from the immortal Caesar, speaking of Brutus, and groaning under the burden of our time, have wished that you could see better.’

Brutus said nothing for a moment, then: ‘What dangers are you trying to lead me into, Cassius, that you want me to find something in myself that’s not in me?’

‘Alright, then, good Brutus, ’ said Cassius, ‘be prepared to listen. And since you know that you can’t see yourself without some reflection, I will be your mirror and reveal to you something about yourself that you don’t know. And don’t be suspicious of me, gentle Brutus. If I were a buffoon or told everyone that he was my friend, or if you think I fawn over people, befriend them and then tell lies about them, or if you think that I throw myself around and claim friendship with anyone and everyone when I’m drinking, then think of me as dangerous.’