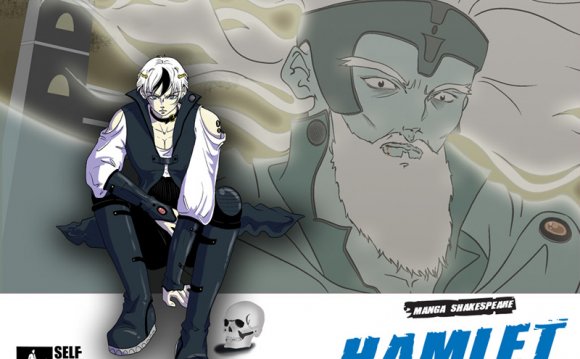 I throw open the doors, to let in the wind and the cry of the world. - Ophelia

While not well known to English-speaking audiences, Heiner Müller is considered by many Germans to be a leading dramatist of the twentieth century. Many of his plays rework classical myths or stories in a struggle to make sense of the collision between mythology and ideology in post-war Eastern Europe.

His Hamlet Machine is a postmodern masterpiece and a harrowing portrait of life under totalitarian rule. Much of the complex play consists of dramatic monologs, dense with allusions to Shakespeare's play and other works of European culture.

The Hamlet-actor begins in Brechtian mode, aware of his own role in the ensuing drama, announcing: “I was Hamlet. I stood at the shore and talked with the surf BLAH BLAH, the ruins of Europe in back of me.” (1) These lines echo the Fisher King of T. S. Eliot's "The Waste Land, " who “sat upon the shore / Fishing, with the arid plain behind me”. (2)

In Shakespeare's play, it will be recalled, the hero's father fell victim to murder at his uncle's hands, abetted by Hamlet's complicit mother. Hamlet Machine describes the funeral thus: “The bells tolled the state-funeral, murderer and widow a couple, the councilors goose-stepping behind the highranking carcass' coffin, bawling with badly paid grief”. (3)

Müller's inspiration for Hamlet's father was Traitscho Kostoff, a Bulgarian communist who was executed in a Stalinist purge. (4) Contemporary audiences may sooner think of the bizarre state funeral of Kim Jong-Il, but the subject of the allusion does not matter. Different actors play the parts, arriving on cue for their prescribed roles, but the historical drama does not change. Hamlet reflects:

The set is a monument. It presents a man who made history, enlarged a hundred times. The petrification of a hope. The name is interchangeable, the hope has not been fulfilled. The monument is toppled into dust. (5)

History is fixed by a small number of possibilities, pre-determined by unpersuasive narratives that bind action to violence and oppression. Even the utopian visions they nominally serve have lost their power to persuade or animate. One thinks of the technocrats of Müller's East Germany, tunelessly singing Marxist-Leninist hymns.

As the play proceeds, the Hamlet-actor tries to reject the role to which he has been consigned, refusing to go along with this murder-drama. The dramatic action breaks down, and a political demonstration explodes onto the stage, suggesting the 1967-8 student protests in Berlin.

The Hamlet-actor is swept up in the angry mob and pushed to the police lines, where, in an arresting image, he confronts his own reflection in bullet-proof glass, and sees himself facing himself from the opposite side of the line.

I look through the double doors of bullet-proof glass at the crowd pressing forward and smell the sweat of my fear. Choking with nausea, I shake my fist at myself who stands behind the bullet-proof glass. Shaking with fear and contempt, I see myself in the crowd pressing forward, foaming at the mouth, shaking my fist at myself. (6)

He responds with rage to his own complicity in totalitarianism, then goes home to watch television, “at one / with my undivided self.” (7) In Shakespeare's Hamlet, inaction is a fatal flaw, but when all courses lead to murder, inaction and action both mean self-betrayal, and purity is found only in death, or, in its political equivalent, television.

“I am Ophelia. The one the river didn't keep.”

Ophelia chooses suicide instead of murder. Like Nietzsche's ascetic, her violence turns inward, sublimating her will to power. Her character represents a type for Müller, a woman whose inflexible moral code renders her capable of anything.

She is the “woman dangling from a rope, ” suggesting the far-left RAF terrorist Ulrike Meinhof, whose strident critique of hegemonic capitalism ignited a series of bank robberies and murders. (8) Eventually she was captured, and hung herself in her cell.

Müller's Ophelia would also choose death as a way of dismembering the mechanisms of oppression:

I smash the tools of my captivity, the chair the table the bed. I destroy the battlefield that was my home. I fling open the doors so the wind gets in and the screams of the world. I smash the window. With my bleeding hands I tear the photos of the men I loved and who used me on the bed on the table on the chair on the ground. I set fire to my prison. (9)

In his autobiography, Müller comments “Lenin always said revolution comes from the provinces, and women are the provinces of men.” (10)

Born in Eppendorf in 1929, Müller spent his childhood under the shadow of the Nazi regime. In "The Father, " an early autobiographical prose-poem, he describes being woken from sleep when he was three years old:

In 1933, January 31 at 4 a. m., my father, a functionary of the Social Democratic Party of Germany, was arrested from his bed. I woke up, the sky outside the window black, noise of voices and footsteps. In the next room, books were thrown to the floor. I heard my father's voice, higher than the other voices. I climbed out of bed and went to the door. Through a crack I saw how a man was hitting my father in the face. (11)

Two officers of the Nazi SA, the predecessor to the notorious SS, took his father to a concentration camp, where he was held for over a year for his socialist activities. Müller was shunned as the son of a criminal, and other boys in his village were not allowed to play with him.

After he visited the camp with his mother, he was haunted by the image of his father diminished behind the wire mesh fence, and later, by memories of walking for hours in bitter cold to meet his father upon his release.

I wish my father were a shark
Who tore to pieces forty whalers
(And in their blood I had learned to swim). (12)