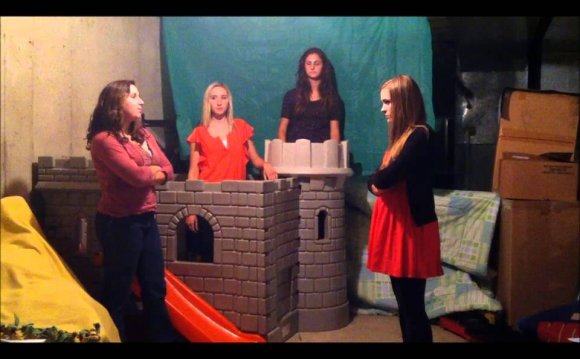 Bernardo climbed the stairs to the castle’s ramparts. It was a bitterly cold night. He made his way carefully through the freezing fog to relieve Francisco of his guard duty. He saw a dim figure and challenged him.

‘No, you answer me!’ It was Francisco’s voice. ‘Stop and identify yourself!’

‘Has it been quiet?’

‘Not even a mouse stirring.’

Bernardo stopped him. ‘If you see the guard master and Horatio, the Prince’s friend, tell them to hurry.’
Francisco set off. He took a few steps then turned and called to Bernardo: ‘I think I can hear them now.’ He went to meet them. ‘Stop! Who’s there?’

‘And loyal subjects of the king, ’ said Marcellus.

‘And to you, honest soldier, ’ said Marcellus. ‘Who’s relieved you?’

‘Tell me, is Horatio with you?’ said Bernardo.

‘What’s left of me, coming out in this cold night, ’ said Horatio.

‘I haven’t seen anything.’

‘Horatio says it’s all in our imaginations and doesn’t believe we’ve seen it twice, ’ said Marcellus. ‘Even though we have, so I’ve brought him with me on the night watch. If this ghost comes again he’ll see it with his own eyes.’

‘Just sit down and let us tell you the story that you won’t believe: tell you what we’ve seen two nights in a row.’

Horatio laughed and dismissed them with a wave of his hand. ‘Well let’s sit down anyway, and listen to Bernardo.’

‘Last night, ’ began Bernardo, ‘when that star that’s to the west of the North pole had crossed the sky to where to it is now, Marcellus and I were sitting here when the bell struck one….’

The three men watched as a figure walked slowly through the fog.

‘The same thing, that looks like the late King!’ Bernardo whispered.

‘You’re a scholar, Horatio, ’ said Marcellus. ‘Speak to it.’

‘Look Horatio, ’ exclaimed Bernardo. ‘Doesn’t it look like the King?’

Horatio shivered. ‘Too much like him. It fills me with fear and wonder.’

‘It wants you to speak to it, ’ said Bernardo.

‘Who are you and why do you disturb our watch, dressed in the armour of the dead King of Denmark?’ Horatio demanded. ‘In the name of God, speak!’

The ghost turned and glided away.

‘Look how it stalks away, ’ said Bernardo.

‘Stop! Speak! Speak! I command you to speak!’ Horatio yelled.

The ghost disappeared into the fog.

Bernardo chuckled. ‘What’s the matter, Horatio? You tremble and you’re pale. Isn’t this something more than fantasy? What do you think now?’

‘Before God, I wouldn’t have believed this if I hadn’t seen it with my own eyes!’ exclaimed Horatio.
‘Isn’t it just like the King?’

‘As much as you look like yourself.’ said Horatio. ‘That was the very suit of armour he wore when he frustrated the ambitions of the Norwegian king. I remember that frown – the same as on the day he trumped the Polish forces as they crossed the ice on their sledges. It’s strange.’

‘He disturbed our watch twice before at this very hour with that military bearing.’

‘I don’t know what to think about it, ’ said Horatio, ‘but my overall opinion is that it bodes ill for matters of state.’