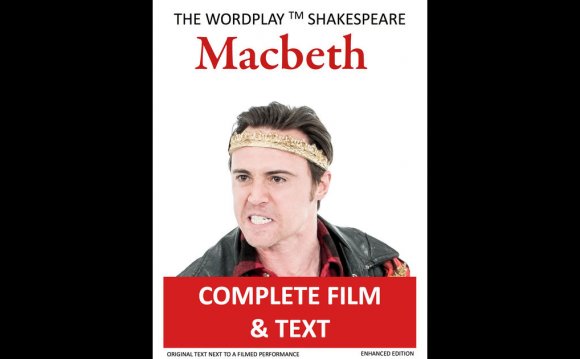 The main source for Shakespeare’s Macbeth play was Holinshed’s Chronicles. Holinshed in turn took the account from a Scottish history, Scotorum Historiae, written in 1527 by Hector Boece. Shakespeare, flattering James 1, referred to the king’s own books, Discovery of Witchcraft and Daemonologie, written in 1599. Some of the main ideas of Macbeth are Nature, Manhood and Light versus Dark. And of course Macbeth is considered one of Shakespeare’s most violent plays.

In Macbeth, the murder of a king by one of his subjects is seen as unnatural and the images ofthe play reflect this theme, with disruptions of nature, like storms – and events such as where the horses turn on their grooms and bite them. In Macbeth Shakespeare explores what it is to be a man. Lady Macbeth accuses Macbeth of being unmanly because of his hesitation in killing Duncan, but Macbeth says that it’s unmanly for a man to kill his king. Shakespeare plays with that paradox. Duncan is a good king and a good man, and he is surrounded by images of light. Macbeth and Lady Macbeth turn their surroundings into a picture of hell, blanketed in darkness. Those images of light and dark interact throughout the play. Traditionally, there is a curse on Macbeth. Actors and productioncrews perpetuate the superstition by avoiding using the play’s title, Macbeth, which is considered bad luck. It has to be referred to as “The Scottish Play”. Read more about Macbeth settings

Genre classification: Macbeth is regarded as a tragedy.

Macbeth Characters: The hero, Macbeth, the Thane of Glamys and later Thane of Cawdor, murders the king, Duncan, and is elected as king in his place. Lady Macbeth, his wife, is his co-conspirator in the murder. Duncan’s sons, Malcolm and Donalblain, themselves in danger, flee. Banquo, Macbeth’s friend, is also murdered by Macbeth. Macduff, the Thane of Fife, suspects Macbeth and his whole family is massacred. Macduff is the man who finally kills Macbeth.

There are three witches, who plant the idea of murdering Duncan in Macbeth’s mind, and they lead him on to his destruction. Their queen is Hecate. Other characters are the Scottlish noblemen, Lennox and Ross, and the English general, Siward and his son, Young Siward. See a full list of Macbeth characters.

Themes in Macbeth: The main themes in Macbeth are ambition and guilt. Macbeth’s overweening ambition leads him to kill Duncan and from then on until the end of the play he suffers unendurable guilt. Another theme is that of appearance and reality. Of all Shakespeare’s characters, Macbeth has the most difficulty in distinguishing between what is real and what is not.