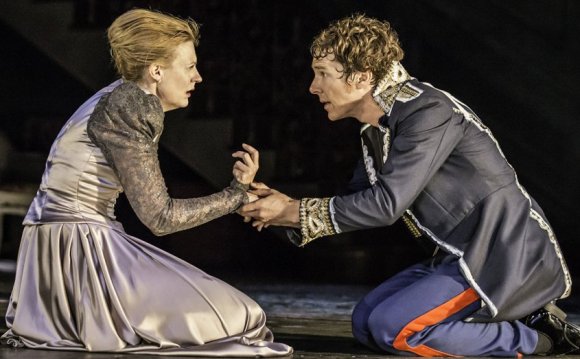 The ghost kept walking. Hamlet held it in sight, afraid that it would disappear. ‘Where are you leading me to?’ he called. ‘Speak. I won’t go any further.’

The ghost stopped and turned. Hamlet found himself looking into the blank, staring white face of the man who had been his father.

It was his father’s voice, but cold and expressionless.

‘The time has almost come when I must surrender myself to sulphur and tormenting flames.’

‘Don’t pity me. Listen carefully to what I’m going to tell you.’

‘You will also have to revenge when you hear it.’

‘I am your father’s spirit, doomed for a certain time to walk the night, and for the day to burn in fires, till the foul crimes done during my lifetime have been burnt and purged away. But that I am forbidden to tell the secrets of my prison-house I could tell a tale whose lightest word would shrivel up your soul, freeze your young blood, make your eyes start from their sockets and your hair stand up on end like the quills of a frightened porcupine. But this eternal torture is not for ears of flesh and blood. Listen, oh listen! If you ever loved your dear father…’

The ghost broke off and let out an anguished wail.

‘Oh God!’ It was too much for Hamlet.

‘…revenge his foul and most unnatural murder.’

‘Murder most foul, as murder always is, but this one was most foul, strange and unnatural.’

‘Tell me quickly so that, with wings as swift as meditation or thoughts of love, I may sweep to my revenge.’

‘I find you willing, the ghost said, ‘and if you didn’t act on this you would be more drowsy than the fat weed that roots itself in the comfort of the banks of Lethe, the river of forgetfulness. Now Hamlet, hear: It’s been reported that, sleeping in my orchard, a snake bit me. So the ear of Denmark has been grossly abused by a fraudulent account of my death.’ The ghost paused again and seemed to be overwhelmed by the thought he had just pronounced. Then his voice came again, as steady and cold as it had been up until now. ‘But know this, you noble youth. The serpent that did take your father’s life now wears his crown.’

‘Oh, I had almost thought that!’ exclaimed Hamlet. ‘My uncle!’

‘Yes, that incestuous, that adulterous, beast. With the witchcraft of his intelligence, with his traitorous qualities – oh evil intelligence and qualities that have the power to seduce like that – he forced the will of my most seeming-virtuous queen to his shameful lust. Oh Hamlet, what a falling-off was there!’

The ghost continued: ‘From me, whose love was of that dignity that it was of the same high order as the vow I made to her in marriage, to descend to the level of a wretch whose natural gifts were poor compared with mine! But in the same way as virtue will never allow itself to be seduced by lewdness, even if it comes in the shape of heaven, lust, though disguised as a radiant angel, preys on the garbage to be found in a holy bed.’

The Beauty of the Modern English Version