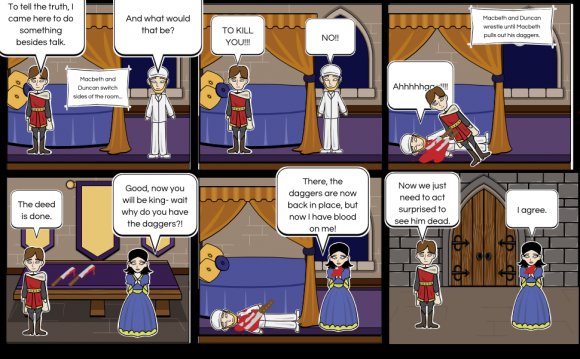 In a dark cavern, a bubbling cauldron hisses and spits, and the three witches suddenly appear onstage. They circle the cauldron, chanting spells and adding bizarre ingredients to their stew—“eye of newt and toe of frog, / Wool of bat and tongue of dog” (4.1.14–15). Hecate materializes and compliments the witches on their work. One of the witches then chants: “By the pricking of my thumbs, / Something wicked this way comes” (4.1.61–62). In fulfillment of the witch’s prediction, Macbeth enters. He asks the witches to reveal the truth of their prophecies to him. To answer his questions, they summon horrible apparitions, each of which offers a prediction to allay Macbeth’s fears. First, a floating head warns him to beware Macduff; Macbeth says that he has already guessed as much. Then a bloody child appears and tells him that “none of woman born / shall harm Macbeth” (4.1.96–97). Next, a crowned child holding a tree tells him that he is safe until Birnam Wood moves to Dunsinane Hill. Finally, a procession of eight crowned kings walks by, the last carrying a mirror. Banquo’s ghost walks at the end of the line. Macbeth demands to know the meaning of this final vision, but the witches perform a mad dance and then vanish. Lennox enters and tells Macbeth that Macduff has fled to England. Macbeth resolves to send murderers to capture Macduff’s castle and to kill Macduff’s wife and children.

At Macduff’s castle, Lady Macduff accosts Ross, demanding to know why her husband has fled. She feels betrayed. Ross insists that she trust her husband’s judgment and then regretfully departs. Once he is gone, Lady Macduff tells her son that his father is dead, but the little boy perceptively argues that he is not. Suddenly, a messenger hurries in, warning Lady Macduff that she is in danger and urging her to flee. Lady Macduff protests, arguing that she has done no wrong. A group of murderers then enters. When one of them denounces Macduff, Macduff’s son calls the murderer a liar, and the murderer stabs him. Lady Macduff turns and runs, and the pack of killers chases after her.

Outside King Edward’s palace, Malcolm speaks with Macduff, telling him that he does not trust him since he has left his family in Scotland and may be secretly working for Macbeth. To determine whether Macduff is trustworthy, Malcolm rambles on about his own vices. He admits that he wonders whether he is fit to be king, since he claims to be lustful, greedy, and violent. At first, Macduff politely disagrees with his future king, but eventually Macduff cannot keep himself from crying out, “O Scotland, Scotland!” (4.3.101). Macduff’s loyalty to Scotland leads him to agree that Malcolm is not fit to govern Scotland and perhaps not even to live. In giving voice to his disparagement, Macduff has passed Malcolm’s test of loyalty. Malcolm then retracts the lies he has put forth about his supposed shortcomings and embraces Macduff as an ally. A doctor appears briefly and mentions that a “crew of wretched souls” waits for King Edward so they may be cured (4.3.142). When the doctor leaves, Malcolm explains to Macduff that King Edward has a miraculous power to cure disease.

Ross enters. He has just arrived from Scotland, and tells Macduff that his wife and children are well. He urges Malcolm to return to his country, listing the woes that have befallen Scotland since Macbeth took the crown. Malcolm says that he will return with ten thousand soldiers lent him by the English king. Then, breaking down, Ross confesses to Macduff that Macbeth has murdered his wife and children. Macduff is crushed with grief. Malcolm urges him to turn his grief to anger, and Macduff assures him that he will inflict revenge upon Macbeth.

The witches are vaguely absurd figures, with their rhymes and beards and capering, but they are also clearly sinister, possessing a great deal of power over events. Are they simply independent agents playing mischievously and cruelly with human events? Or are the “weird sisters” agents of fate, betokening the inevitable? The word weird descends etymologically from the Anglo-Saxon word wyrd, which means “fate” or “doom, ” and the three witches bear a striking resemblance to the Fates, female characters in both Norse and Greek mythology. Perhaps their prophecies are constructed to wreak havoc in the minds of the hearers, so that they become self-fulfilling. It is doubtful, for instance, that Macbeth would have killed Duncan if not for his meeting with the witches. On the other hand, the sisters’ prophecies may be accurate readings of the future. After all, when Birnam Wood comes to Dunsinane at the play’s end, the soldiers bearing the branches have not heard of the prophecy.