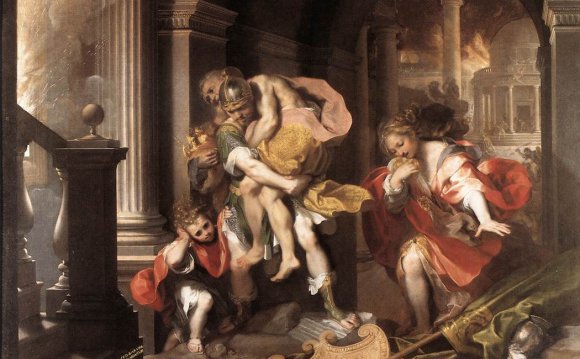 The poetic treatise on farming in four books.

The epic poem of Aeneas of Troy, and the origins of Rome.

In the Aeneid, Virgil retells, and partially invents, the story of Aeneas, the son of Anchises and the goddess Venus-Aphrodite who, fleeing the ruins of Troy carrying his father on his shoulders, and bearing his household gods, journeyed to Italy. In doing so Virgil consciously creates the national epic of Rome, posits a semi-divine lineage for the Imperial house of Augustus Caesar, and provides an origin for the Roman people. Full of powerful and evocative passages, for example those describing Aeneas’ desertion of Dido, Queen of Carthage, and those describing his visit to the Underworld, the Aeneid ensured Virgil’s literary fame.

Aeneas embodies the Roman virtues of steadfastness, and loyalty, coupled with a sense of destiny, which Virgil reinforces with pseudo-prophetic elements implying that the founding of Rome was a fated consequence of the destruction of Troy. From a literary viewpoint, Aeneas provides continuity between the epics of Greece, where he appears as a character in the Iliad, and the epics of Rome where he is portrayed as an ancestor of Romulus, Rome’s founder.

Virgil’s work had a wide influence on later Roman epic and on European literature in general. Dante in particular employed Virgil as guide to his journey through the Inferno and Purgatory of the Divine Comedy, seeing him as a proponent of Empire, a master of the poetic tradition, and a prophet of the advent of Christianity.

Virgil (Publius Vergilius Maro, also called Vergil) was born near Mantua, in Cisalpine Gaul, in 70BC. He is known for three major works of Latin literature, the Eclogues or pastoral poems, the Georgics a treatise on farming, and his epic the Aeneid. He benefited greatly from the enlightened patronage of Maecenas, an ally, friend and political advisor to the Emperor Augustus. Virgil dedicated the Georgics to Maecenas. According to tradition, Virgil visited Greece in order to revise the Aeneid which he wrote between 29 and 19BC. After meeting Augustus in Athens and deciding to return home, he caught a fever and, after crossing to Italy, died in Brundisium (Brindisi) in September of the latter year, his ashes reputedly being interred on the site of his villa near Naples, where a burial vault is shown today as Virgil’s Tomb. The Aeneid was published in full after his death, on the orders of Augustus.