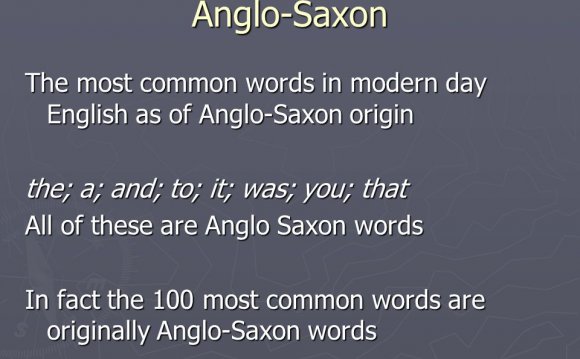 So once upon a time, in the fifth and sixth centuries, the Angles and the Saxons of Schleswig-Holstein (think Germany) invaded Britain and brought with them their Germanic language. Then, several centuries later, the English adopted lots of French words into their language. French, a romance language, is rooted in Latin (like the other romance languages, which is why you notice a lot of words that look and sound alike). The English that we speak today is a combination of that old Germanic language and the influx of latinate words. This is obviously a simplistic explanation, but you get the idea.

Anglo-Saxon and Latinate words have a very different sound and feel to them.

I once wrote a sonnet where the narrator was very angry. When my professor returned my paper, she said that the anger wasn’t coming across because I was in “the head” vs. “the body.” What she meant was that I was using big, intellectual words that a reader would have to ponder the meaning of, rather than shorter, more emphatic words that one would express in a rage. Think of the plethora of 4-letter words that pop out of our mouths when we stub our toes or someone cuts us off on the freeway. Do you say “shit” or “excrement”? If you’re like me, you sound more like a trucker than a professor.

Have you ever been reading a work and felt like the language was formal or somehow distant from emotion? Sometimes, the root of this lies in the type of diction that the author is leaning toward. Fantasy stories and historicals often veer toward Latinate diction, which can be part of the reason they don’t sound modern. In contrast, when YA contemporary stories use a lot of Latinate diction, I doubt the author is in touch with their teen audience.

Works are going to employ BOTH Anglo-Saxon and Latinate diction, but awareness of the differences between the two can help you to use them more effectively. When writing an emotional scene, try to get into your character’s body or use blunter language. Use more of those Anglo-Saxon type words and try to avoid abstract thinking. Look at the difference between these two sentences.

“I slept with your best friend, ” he said.

“I hope you putrefy in hell, you prevaricating cheat.” she shouted. “I’m glad to be emancipated from you.”