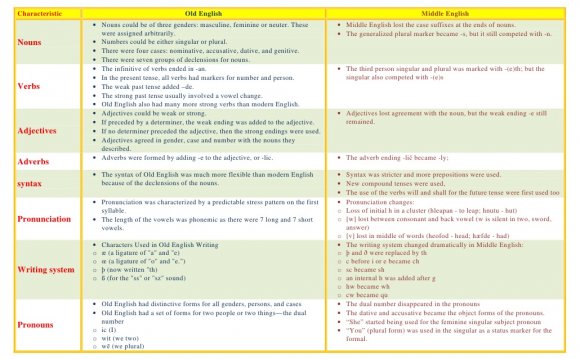 Old English
Origin
Old English was spoken from mid 5th century to the mid-12th century. It was a West Germanic language of the 5th century. The origin of the old English started from ingvaeonic also called “Germanic of the North Sea”. Ingvaeonic was named after a West Germanic proto-tribe cultural group called Ingaevones. This language was a grouping of Old Frisian, Old Saxon and Old English. Later it developed into Anglo- Saxon language, the language spoken by people living in parts of modern England and Southeastern lands of Scotland. Anglo–Saxon was developed only after 7th century after Christianization. It was constantly influenced by many languages.

Development
Old English was influenced by Latin, Norse and Celtic. Latin influenced it in three periods, firstly, when the Anglo-Saxons went to Britain, secondly when the Latin speaking priests converted the Anglo- Saxons to Christianity and lastly when the Normans conquered England in 1066.
The second language influencing old English was Norse; it began with the Scandinavian words being introduced after the Vikings invaded England in the 9th and 10th centuries.
Celtic’s major influence was mainly on syntax and not on vocabulary.

Dialect
Old English was not a monolithic language; it had multiple variations in different regions. It had developed from languages and dialects of many different tribes; each dialect was spoken by independent kingdom. There were four main dialects, Mercian (dialect of Mercia), Kentish (dialect of Kent), West Saxon and Northumbrian (dialect of Northumbria)

Morphology
The morphology included accusative, dative, nominative and instrumental.
Orthography
At first it was written in runes then in half uncial till 9th century later in insular script till 12th century.

Origin
Middle English was spoken during late 11th century to late 15th century. It developed from the Late Old English, which was spoken in Norman England.(1106-1154)

Development
Middle English gradually ended the Wessex, as the writing language and emerged as the focal language for writers and poets. Many regions had their own dialects and there were variety of different writing styles. It became more prominent in the 14th century, in the 12th and 13th century it was more Anglo-Norman.

Dialects
It had many dialects in different regions but during 15th century, printing began in England (1470) and the language started becoming more standardized.

Morphology
The language became more like Modern West Frisian, a Dutch related language than the Germanic, because of its simplification.
Orthography
All the letters were pronounced in Middle English there were no “silents” but by Chaucer’s time the final “e” became silent.

Middle English Reading II The fox and the wolf