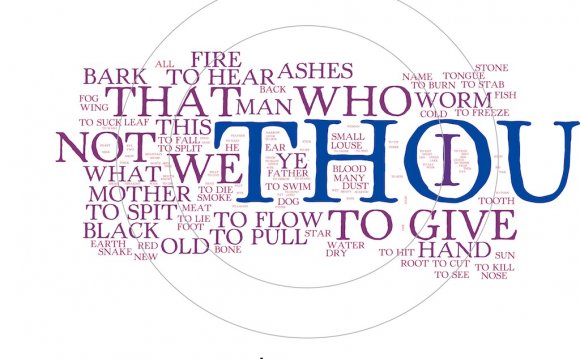 Everybody has, on occasion, looked up a word in a dictionary and let their eye wander to the next word and thought: "Really? There's a word for that?", whether it's the little plastic aglets on the end of your shoelaces or the nurdle of toothpaste squeezed onto your toothbrush in the morning. I have simply had that feeling more than most.

In the end, I collected all the useful but forgotten, and obscure but necessary words I found in dusty, old dictionaries, and arranged them by the hour of the day when they might come in handy for my book about lost words, The Horologicon. Here are 10 of my favourites.

Wamblecropt means overcome with indigestion. Once upon a time, you might observe that your stomach was wambling a bit. If the wambles got so bad you couldn't move, you were wamblecropt. It's the most beautiful word in the English language to say aloud. Try it.

Sprunt is an old Scots word (from Roxburgh, to be precise) meaning "to chase girls around among the haystacks after dark". I would dearly love to have lived in a time and a place where this was such an everyday activity that they needed a single-syllable word for it. Old dialect words give us a glimpse of lost worlds, and sprunt is my favourite glimpse.

Another old Scots word, to groke is to gaze at somebody while they're eating in the hope that they'll give you some of their food. The word was originally used to refer to dogs – and any dog owner whose canine friend has salivated beside them while they eat a steak will know why – but it can also be used to describe that colleague who sidles up to you from across the office when you open a box of chocolates.

Uhtceare is an Old English word that refers to anxiety experienced just before dawn. It describes that moment when you wake up too early and can't get back to sleep, no matter how tired you are, because you're worried about the day to come.

Snollygoster is a 19th century American word for "a dishonest or corrupt politician". Or, to take an original definition from the editor of a Georgia newspaper: "a snollygoster is a fellow who wants office, regardless of party, platform or principles, and who, whenever he wins, gets there by the sheer force of monumental talknophical assumnacy". The only reason I can imagine such a delicious word would die out is that all politicians are now honest.

Ultracrepidarianism is when you give your opinion on a topic about which you know nothing. What makes this word so useful is that nobody knows what it means. Tell someone they are ultracrepidarian and they'll probably consider it a compliment.

I found gongoozle deep in the Oxford English Dictionary while I was researching The Horologicon. To gongoozle is to stare idly at a canal or watercourse. At the time, I thought it a weirdly precise and unnecessary word, but since then I've noticed gongoozlers everywhere. Walk along a riverbank or seafront on a sunny afternoon and you'll see lots of people happily gongoozling. I realised that I'd been gongoozling for years; I'd just never known the word.

To snudge is to stride around as though you're terribly busy, when in fact you are doing nothing. It's particularly useful for the modern office, especially with the invention of the smartphone. You can snudge around all day without anyone realising you're checking up on the score in the Ashes.

Feague is a term from around the 18th century that means to put a live eel up a horse's bottom. Apparently, this was a horse dealer's trick to make an old horse seem more lively, which I suppose it would. But it does imply that you should never trust an 18th century horse dealer – especially if you're a horse, or an eel. I hope you find no use for this word. In 2012, a chap who walked into Auckland City Hospital, in New Zealand, could have saved himself a lot of embarrassment if he had simply announced: "I need to be de-feagued".

How to transfer old dictionary words onto polymer clay