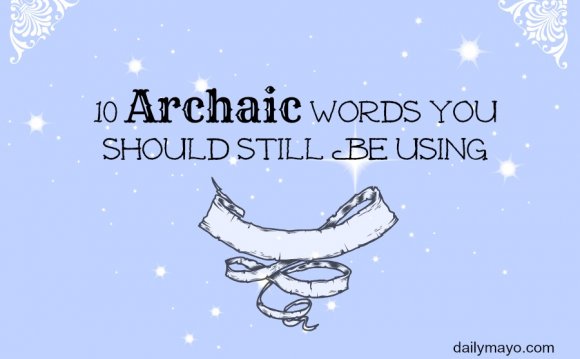 When I was a child, my grandmother routinely used a word that is all but extinct now. Once, while I was reporting on my progress in school, she smiled with genuine pride and said, "Well, isn't that grand." Try as I may, I still can't come up with a better word for my achievement. "Terrific" would have been over the top, and "nice" too neutral for a doting grandmother's needs. So yes, my success in school was grand. Mighty grand.

I like old-fashioned words. Although I don't believe I actually ever used the word "galoshes" as a kid, my great uncle Bill was a firm believer in proclaiming their virtue at the first hint of rain, and I can still remember an older neighbor lady in my New Jersey neighborhood inveighing me and my friends to "Stay off the macadam!" because of the traffic. I had never heard such a word for a paved road before, but the force of the woman's admonition drove its meaning home for me and kept me out of harm's way.

Likewise, who today says "stockings" for "socks"? Who, besides my mother, packs a "valise" with things from her "chifforobe"? Or refers to a little lea­guer's line drive as "splendid"? Once, as a boy, I was out roughhousing with my friends (but not on the macadam!). This brought yet another watchful neighbor to her front porch to demand, "What is this, a hullabaloo?" I had never heard the word, but I knew that I liked it. I don't think I have ever used the word myself, but I keep it handy, just in case some kids try to mix it up in front of my house.

All of these words are outdated but they still have a pulse, because there are still people around who use them. My father, a World War II vet, also said "grand" (he got it from his mother). My own mother still differentiates between a valise and a suitcase (a valise is small, intended for no more than a weekend away from home). And journalists who aspire to the literary will sometimes drag "hullabaloo" out of mothballs to make a point. (Title of a New York Times review of a children's musical: "A Lot of Hullabaloo Over a Shallaballah.")

Give me an old-fashioned word